Dysphagia is a feeling of discomfort or obstruction when saliva or food passes from the mouth to the stomach. Although it is more common in the advanced stages of Parkinson’s, it can occur at any stage of the disease.

Close to 90% of people living with Parkinson’s disease have difficulty swallowing.

Signs of a swallowing disorder can sometimes be subtle and go unnoticed, which is why you need to carefully note any changes in your ability to swallow.

Dysphagia is usually accompanied by :

Difficulty swallowing during meals and excess saliva on the corner of the lips can also cause embarrassment that can increase social isolation.

Given the risks associated with swallowing disorders (dehydration, undernutrition, choking, pneumonia), it is important to discuss it as soon as possible with your neurologist. Early treatment will help preserve your health and quality of life.

What are the causes of swallowing difficulties?

The disease also affects the tongue, which plays a crucial role in swallowing. The tongue directs food to the back of your mouth and protects the trachea that leads to your lungs.

The muscles that move food down into your stomach are also slower, which can lead to feeling full.

When should I consult a specialist to treat swallowing difficulties?

Difficulty swallowing does not only occur when eating. Here is a list of things to watch out for to help you determine if you should see a specialist:

Watch for symptoms associated with swallowing difficulties. If you think you may have dysphagia, discuss it with your neurologist and they can refer you to specialists. For example, a speech therapist will assess your swallowing and suggest exercises to improve or maintain your ability to swallow, and an occupational therapist will adapt your environment and facilitate mealtimes.

How is dysphagia diagnosed?

Dysphagia is usually diagnosed with X-ray swallowing exams. This examination, performed with a speech therapist, helps determine where exactly the abnormalities are located (mouth, throat) and understand what mechanisms are involved.

What can I do to swallow more easily?

To make swallowing easier and enjoy your meals, you can:

Seeing a speech therapist and occupational therapist remains your best option in case of swallowing difficulties.

How can I help my loved ones?

Swallowing difficulties increase risks of choking. You can learn the Heimlich maneuver which is a rapid first aid procedure to treat choking due to upper airway obstruction. You may never have to use it, but it can save a life.

If a loved one goes to a speech therapy or occupational therapy appointment, go with them. These specialists will also work with you and give you practical advice to make meals more enjoyable and less anxiety-inducing.

Never rush your loved ones during mealtimes.

How does difficulty swallowing progress over time?

Dysphagia usually appears in the later stages of the disease, although in some cases a slight difficulty in swallowing may appear early on.

Serious swallowing difficulties can lead to:

If these problems get worse despite speech therapy and occupational therapy interventions, a doctor may suggest a change in diet or, in more advanced cases, a gastric feeding tube. 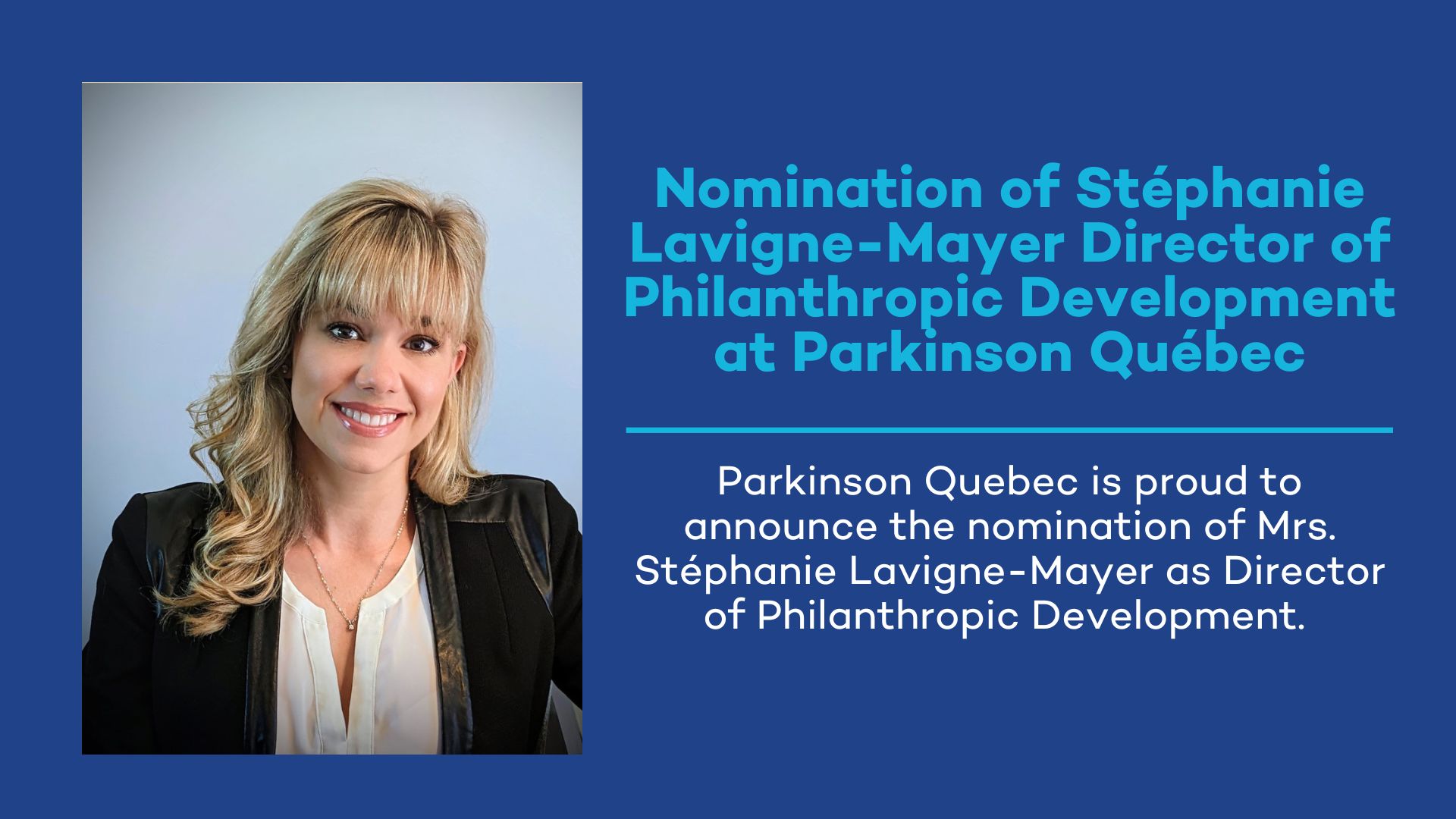 Parkinson Quebec is proud to announce the appointment of Ms. Stéphanie Lavigne Mayer as Director of Philanthropic Development. Driven by […]
Learn more 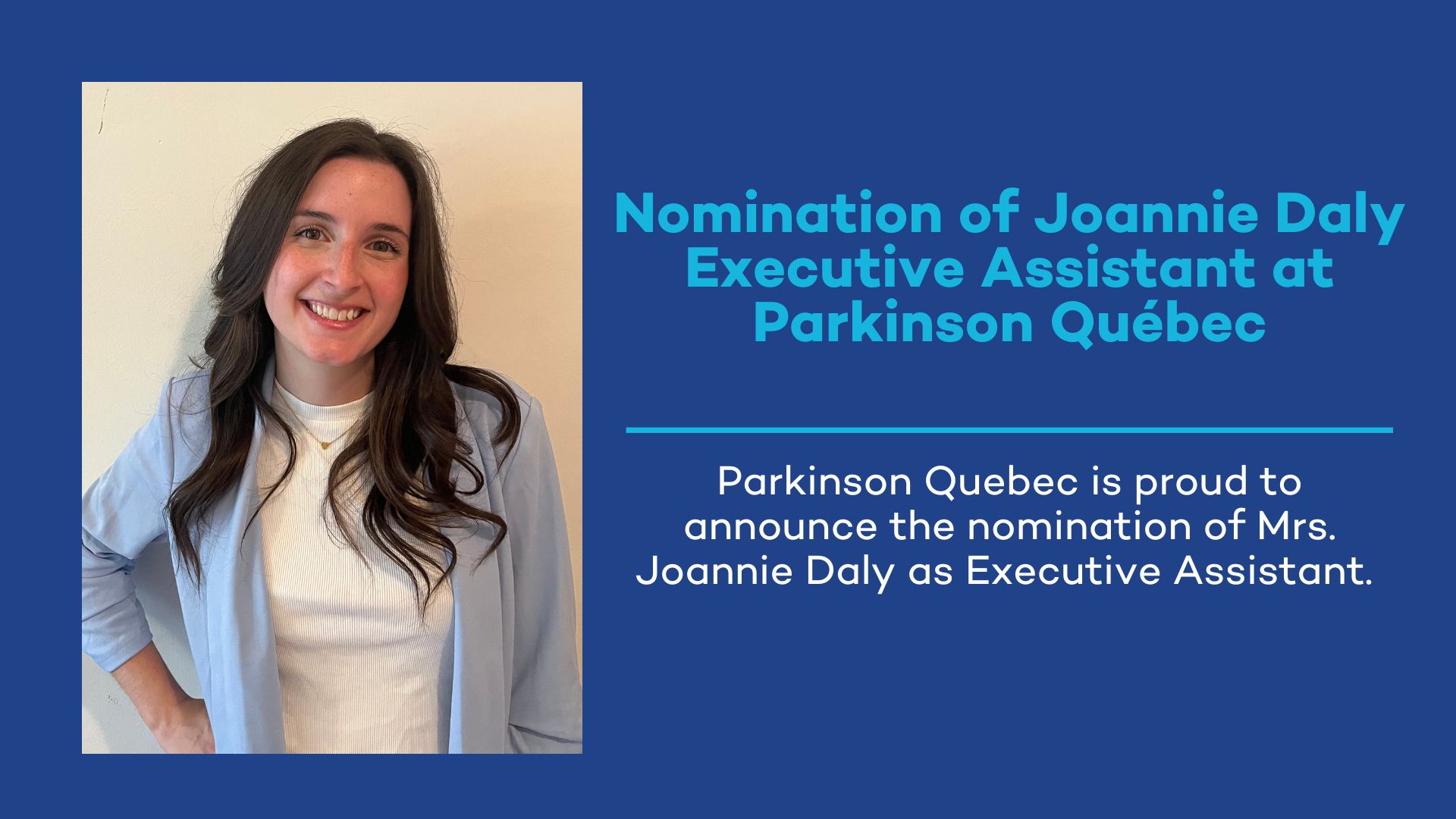 Parkinson’s Quebec is proud to announce the appointment of Ms. Joannie Daly as Assistant to the Executive Director and Director of Philanthropic Development. Recognized for […]
Learn more 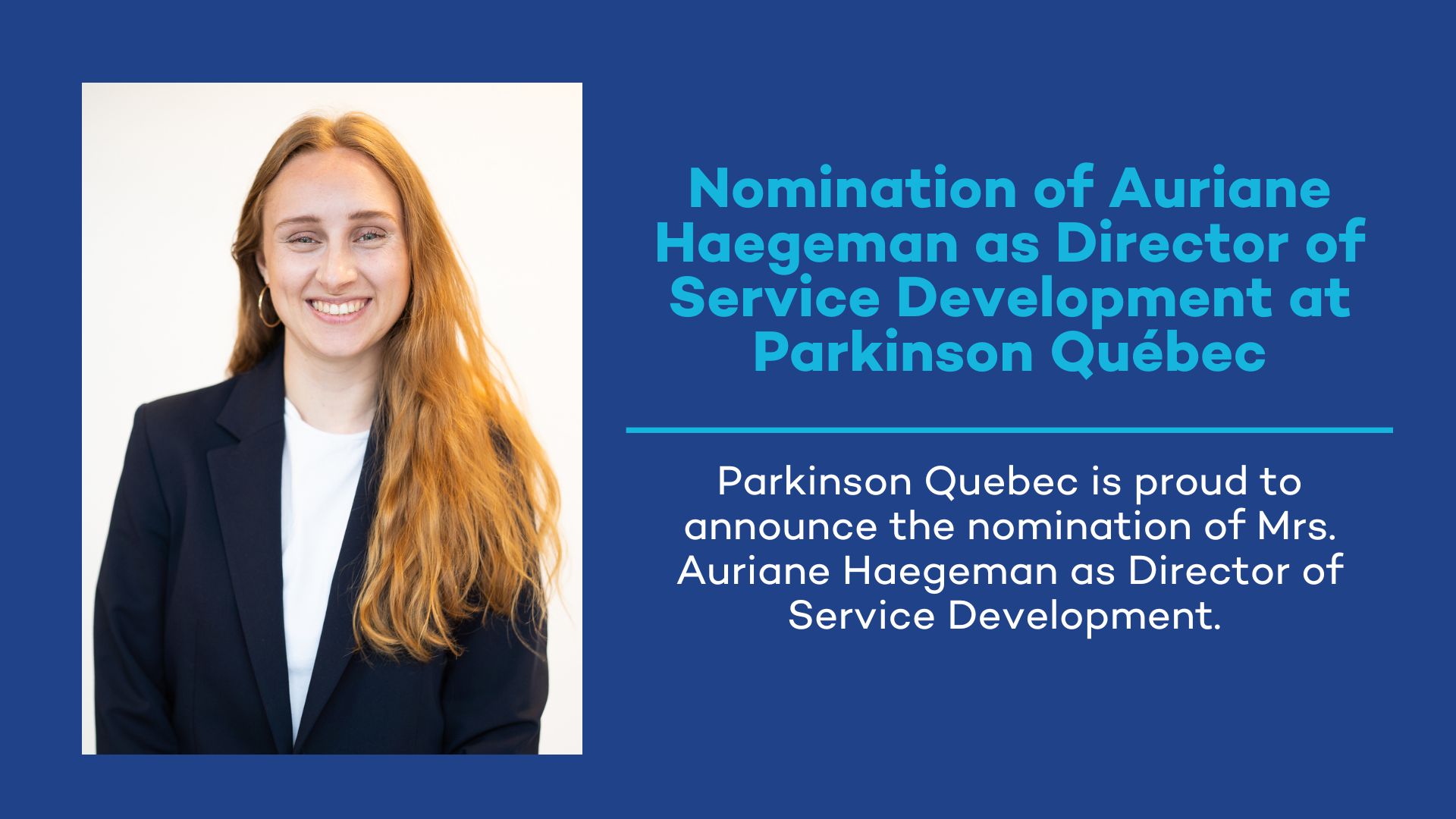 Parkinson Quebec is proud to announce the nomination of Mrs. Auriane Haegeman as Director of Services Development. Since her arrival […]
Learn more
See all the news